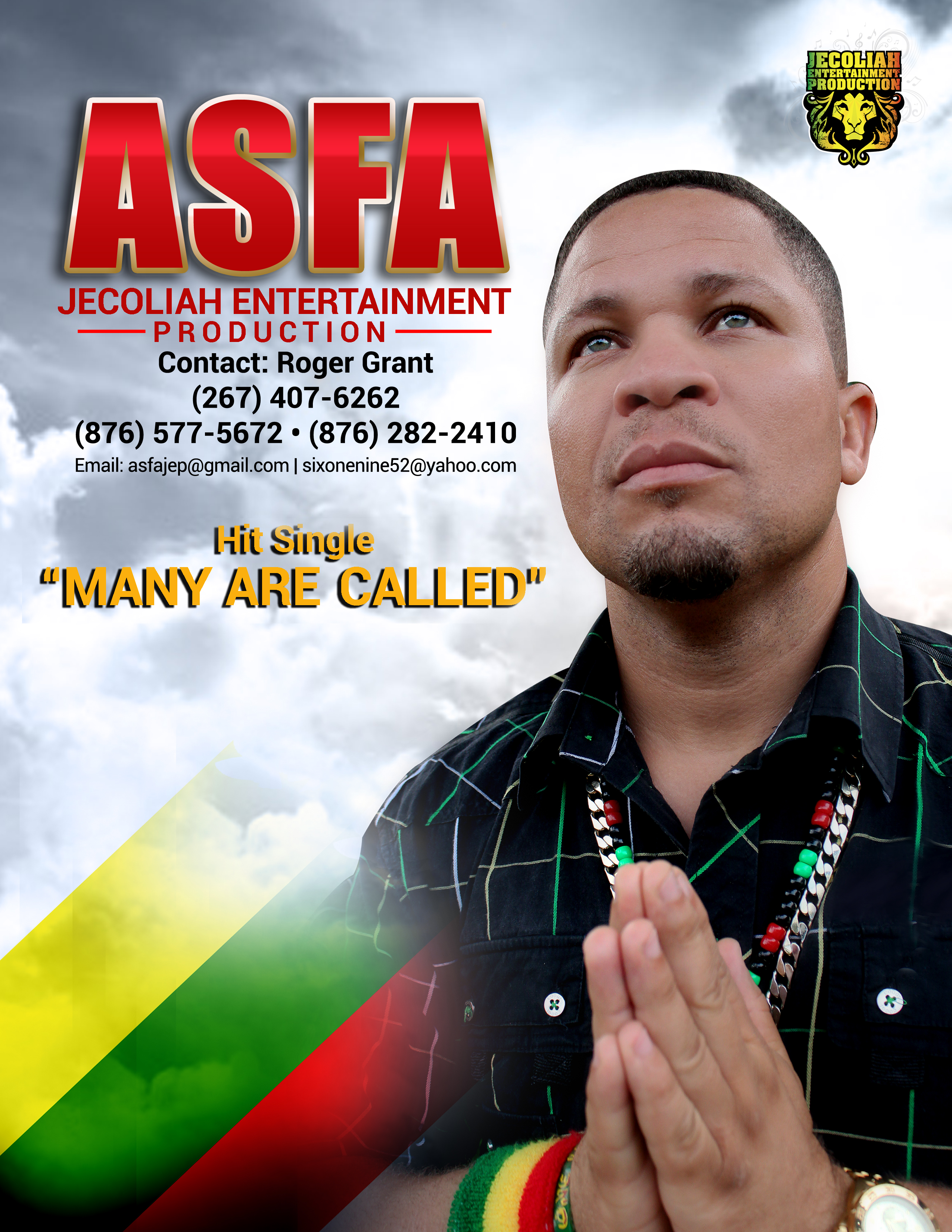 Quality music for all.

“Music is the food of life and I want to be the host of the feast.” So says Asfa a brand new contender in the reggae music arena.

The artist after making a bold decision to leave all the comforts of living in the US for his native country Jamaica is already seeing the benefits.

This by way of the hot new single Many Are Called which has become a staple on local radio and the accompanying video which is heavily rotated on television. The song is the follow up to Not The Life which charted on several countdowns like The Jamaica Top 25 Reggae Chart, Australia Reggae Chart, Bess FM Culture Chart, Holland Top 25 Reggae Chart and New York Top 30 Reggae Chart which actually peaked at #1. Many Are Called has seen an avalanche of interest since its release and is becoming Asfa’s signature song wherever he performs.

He was, christened Asfa Whyte. and his beginning was a humble one living in a tiny wooden house, in Bedward Pasture a.k.a Dread Heights, in Kingston, with mother Lileith McDermott and father Carl Whyte. He entered into the world as the fifth child of ten siblings.

Musical ambitions would be stirred in the young man as his father popularly known as Zeby, a Rastafarian and a member of The Twelve Tribes of Israel sect, would eventually become the road manager for several artists most notably Freddie McGregor and Dennis Brown. Asfa’s own involvement in the business manifested in an interest in the sound systems where he graduated from box bwoy to selecting mainly on Travellers Disco.

Later on in his life, Asfa realized that he wanted to do more than just playing other artist’s music, he wanted to produce his own. He penned his first song, “King Jesus” a gospel music hymn. He also worked with artists like Judy Mowatt, who recognized Asfa’s talent.

He was on his way to fulfilling his dreams, but they were somewhat deferred when his father, who had been in the U.S.A. for several years, petitioned for his children to join him in Queens, NY where he shortly after migrated to.

The migration to the U.S.A., was not as it was portrayed in the movies. Asfa had to work blue collar jobs to make ends meet. His music, his food, was left on the back-burner for a few years, while he assimilated to the American culture.

As time passed, Asfa’s craving grew stronger. Music was beckoning him to come back, to reach the epitome of his childhood desires. This time though, as a singer.

In August 2011, Asfa met producers Roger Grant and Patrick Dunn of Philadelphia based label 619 Entertainment and in September 2011 Grant flew to Jacksonville, Florida and recorded two singles “Not the Life” and “Bacchanal with the artist.”

Asfa later travelled to Philadelphia where the work continued resulting in two more songs “Take a Look” and “Mother I,” the latter dedicated to his late mother. Creating his own imprint Jecoliah Entertainment Production in 2011, and appointing Roger Grant as his manager was an indication of how serious he was this time around.

On the urging of his manager the move to Jamaica was made and his career as an artist became the new reality. Since that decision Asfa’s star has been steadily rising with multiple performances all over the island. With the new single Many Are Called, a clever cover of the I Threes original he aimed for the hearts of reggae lovers in Jamaica and the world winning him many new fans in the process.

The social media is buzzing with the name Asfa and he can be found on Facebook, Twitter, Youtube, Reverbnation, Instagram, Beat100 etc, and a faltering reggae music scene hungry for new talent of quality is already taking notice