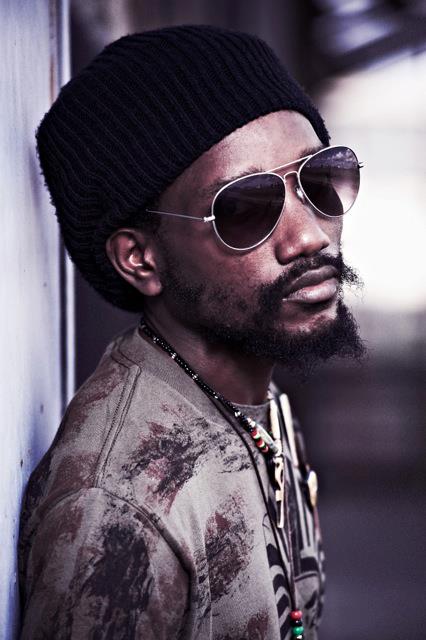 Keron “Kabaka Pyramid” Salmon is a multi-talented artist and producer hailing from the streets of Kingston, Jamaica with a unique musical style blending the power, energy and melody of Reggae with the lyricism of Hip hop. He is based out of the Bebble Rock Music camp and through his liquid and hypnotizing delivery spreads the positive messages of spirituality and conscious evolution that forces you to listen.

The name “Kabaka” is Ugandan for “King” and the long lasting survival of the Pyramids of ancient Africa represent his desire for longevity in the music and deep connection to Kemetic roots; leaving messages for generations to come.

He is an ever-evolving artist that has numerous ways of expressing his creativity. The ability to watch and learn from others around him has made him into somewhat of a Jack-of-all-trades, writing lyrics, producing tracks, engineering/recording himself or other artists, mixing songs, editing video/photos and even playing the guitar!

His passion for music began at an early age when he would change the lyrics to popular songs and record his own version on his mother’s tape recorder. What began as a humorous venture was actually a stepping-stone for the artist we know today. Reggae music has always been a strong influence on the Kingstonian lyricist with Sizzla Kalongi and Peter Tosh providing a great source of spiritual inspiration in his life. During high school Hip Hop music also captivated him; reciting his favorite Canibus lines constantly with Nas and Common serving as great examples of the success of conscious music. The influence of both genres can be easily detected as he seeks to find the perfect fusion of the two cultural expressions.

Kabaka spent his early years as a rapper to underground success. He was awarded a place on internationally renowned; Dj Green Lantern’s “Myspace Invasion” Mixtape as well as released two Mixtapes for himself “The Transition Vol 1 and 2 and a collaboration album “Bebble Business” as part of the Bebble Team group dedicated to his fallen brother in music Rap Brown (Taiwo McKenzie). With these projects he cemented himself as an artist with deep spiritual messages and proven lyrical ability and was instrumental in raising the bar on the standard of Hip Hop in Jamaica.

Pyramid also released a few reggae and dancehall tracks including “Carry on” and “Never be the same” and achieved chart success in Bermuda with the track “Love is all I see” featuring Ashanti. Also as a producer he saw chart success in the Bahamas for “Dead Man Walking”.

In July 2011 Kabaka Pyramid released his “Rebel Music” EP free to the public at www.kabakapyramid.bandcamp.com. This project is a fusion of roots rock, reggae, dancehall and hip-hop and made waves in the global landscape, particularly Europe and North America. It has received an overwhelming worldwide response gaining homepage features on websites and magazines such as Reggaeville and United Reggae and gaining over 14,000 downloads with the 10-track CD regarded as a classic in its own right.

Kabaka has since achieved top spot, placing #1 on the BILLBOARD Next Big Sound Charts Worldwide and also been featured by the popular music conglomerate MTV Iggy. A solid global fan-base has developed that connects with the messages in his music.

Releasing singles such as ”Free from Chains”, “No Capitalist”, “Mi Alright”, and “King Kabaka” as well as music videos for the popular “Free from Chains”, “King Kabaka”, “High and Windy”, “Warrior” featuring Protoje and “World Wide Love”; he has achieved regular rotation on local and international airwaves. Kabaka is being touted by many as strong part of a new wave of powerful artists coming out of Jamaica.

In 2013 Kabaka embarked on his 9 country 20 show “Rebel Music Tour” performing on major reggae festivals spanning from the US West Coast to Europe. He has brought his message and power to stages such as “Reggae on the River”, “Rototom Sunsplash” and the “Chiemsee Reggae Festival”. He has certainly developed a solid global fan-base that connects with his music.

He has also performed in Toronto, Canada at the Manifesto Arts Festival and travelled to Costa Rica for the Rebel Musik Fest series of shows to great response from the people. 2012 was his first visit to Europe completing his 6-week, 13 show "Ready fi di Road " tour where he headlined sold-out club shows in Germany, France, Italy, Austria, Netherlands and Switzerland.

Locally; Pyramid has graced the stage of major local concerts such as Rebel Salute, Trench Town Rock and the Dennis Brown Tribute Concert as well as live national TV performances to rave reviews. He has made a significant impact on the Live Music scene performing at many shows in and around Kingston including the Manifesto Jamaica Festival, JARIA Reggae Month and Live from Kingston shows as well as venues such as Tracks and Records, South Beach Café, Emancipation Park, Wickie Wackie and Pulse.

His new EP “Lead the Way” released in November 2013 has been making waves in the reggae industry debuting at #9 on the Billboard charts. He also featured in the Top ten iTunes reggae charts all over the globe building on his success earlier in the year where he achieved top spot, placing #1 on the BILLBOARD Next Big Sound Charts.

With a mission to steer future generations towards harmony and unity Kabaka is primed and focused on bringing a righteous and conscious way of thinking to the masses through Reggae and Hip Hop Music.

“With a solid list of skills not only in the booth but on the mixing board, and an array of lyrics that preach a message of love, self-awareness and African pride, Kabaka Pyramid is well on his way to a career that should not only lead to greatness but also lead a lot of fans to righteousness” Aesthetics Now Mag.