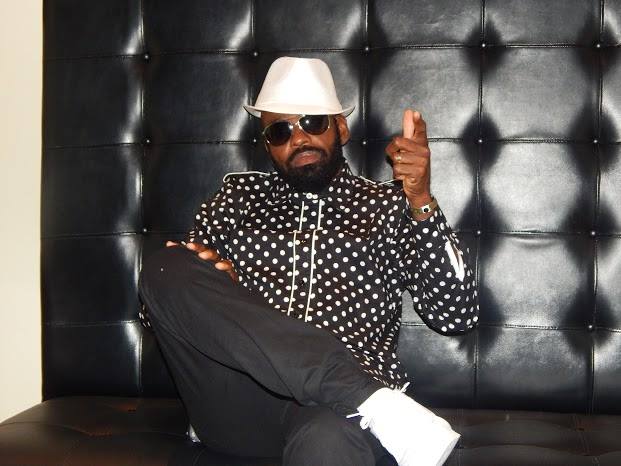 A gifted lyrical genius, with a superb and unique style combined with a powerful delivery that made his music stood up to the harshest of critics, Cleve “Stitchie” Laing, has been transformed from being one of dancehall’s most acclaimed icon into the Ambassador for Christ and his amazing abilities only get better by the minute.

Conferred with an Honorary Doctorate Degree, ordained as a Minister of the Gospel, a Psalmist and a born-again Kingdom Citizen whose repertoire is totally dedicated to all things Christ-Like, Stitchie, like the great characters of the bible, had his name changed after conversion by doing away with the “Lieutenant” part of his moniker, which was a throwback to the days when he was king of the dancehall as Lt. Stitchie, The Governor.

As there is now only one General and one Lieutenant in the Army of God, the LORD, JESUS, THE CHRIST, reverenced and worshipped by Stitchie, the former high school teacher who graduated from G.C.Foster College of Physical Education and Sport was destined to teach valuable lessons in the school of life. Stitchie’s conversion was the culmination of two years spent in quiet reflection on his purpose in life and contemplating eternity, shortly after the death of his beloved mother.

It was following on a near-death car crash on the way to perform at Reggae Sumfest in August 1997 and the receipt of a Gideon New Testament Bible from a Canadian Missionary the very night that Stitchie, on returning to his hotel, read the Bible, prayed, asked for forgiveness of his sins and accepted JESUS THE CHRIST as his Saviour.

Now comfortably preaching and teaching the Gospel, Stitchie since his baptism on December 14, 1997, has witnessed the mighty power of God in his career and in every other area of his life and has seen his boundaries enlargened. Inspired by the LORD and motivated by his zeal and innate determination to excel, Stitchie has once again demonstrated his versatility and creativity as an Author. Stitchie, his wife and the rest of his family, fellowship with the family of God at the Mount Carmel New Life Church of God in Spanish Town, Jamaica, and would occasionally preach the word of God on a Sunday morning when he’s not on tour or not sharing the WORD elsewhere, courtesy of various invitations. Totally consumed by the Gospel, Stitchie feels it vital to engulf himself in the WORD, so he studies the Scriptures with a passion as an Ambassador for Christ.

Since his rise to fame in the late 1980’s, he has been touring extensively as a headliner at various Reggae Music Festivals and Concerts globally and this only intensified when he made the transition to a new life.

Although not one to revel in awards and take any praise unto himself, nevertheless, the excellence of this Bond Servant, Reggae icon and Ambassador for Christ has been recognized nationally and internationally since the release of his very first Album, “Wear Yu Size”, by various awarding bodies too numerous to start naming.

Easily and undoubtedly one of the most sort after Gospel Artiste in the genre of reggae and dancehall. The requests for other Reggae Festivals and Concerts are even at a much higher volume. Stitchie has a reputation for being an explosive, electrifying and high energy performer, who continues this high voltage trend of upward mobility of excellence, with each Album he releases and each time he makes an appearance in front of an audience on stage. Stitchie is credited as an eloquent and didactic speaker, simultaneously, an avid student of the WORD. His excellent stage craft combined with an effective Kingdom message has earned thousands of souls for the Kingdom of God.

Stitchie proclaim that one of the main concerns is to live a life according to the principles of the Kingdom that will be an example to others, especially his former neighbors in the garrison of the inner city communities where he grew up and to his fellow dancehall colleagues.

This trendsetter, who is credited in the analogs of history of Reggae Music in Germany, as the first to bring dancehall music to Germany, and who is inscribed on the pages of the Guinness Book of Records of who`s who in Reggae Music, continues to set a blistering pace and has raised the bar in Reggae/Dancehall Gospel Music a thousand feet higher, simultaneously, reinforcing in Dancehall Music, as a whole, why there is only one “Stitchie” with “LIVE IN GERMANY”. This is an excellent compact, authentic, 100% hardcore, street Reggae and Dancehall rocket, launching an alert and awareness on some real issues of our hearts, simultaneously bringing prominence to the effectiveness of the application of the principles of the Kingdom of God in our lives. As an Ambassador for Christ, it is Stitchie’s mandate to establish and secure his Government`s interest in the territory to which he is commissioned, to further highlight his lyrical supremacy and vocal powers in Dancehall and Reggae Music, is effectively and effortlessly demonstrated on “LIVE IN GERMANY.”, with clinical precision, 100% authentic, hardcore, street Dancehall and Reggae rocket “LIVE IN GERMANY” holds a new message on a familiar horse, captivating and pulsating to 20th power. These twenty epistles were spiritually crafted to reach the unreachable, conquer the invincible, give hope to the hopeless, speaks to the minds of the heartless, repair the eye of the spiritually impaired and to deliver the message of the LIGHT to those lost in darkness. From the inauguration of the track “PRAISE THE LORD”, “LIVE IN GERMANY” authenticates Stitchie’s preparedness and approval from his commander in chief and compels one to move. The other nineteen messages are equally proclaimed with clarity and power. Pablo Knight and Garfield Barnes are both credited for the excellent contribution of their skills on “LIVE IN GERMANY”. Drum & Bass Music has produced one of Stitchie’s best works to date and the future of this album is so bright that not even shades can contain it. This Album is definitely a winner and is destined to send shock waves in analog of Reggae Music worldwide.

With this new Album Stitchie takes it to new level and demonstrates his excellence in vocal delivery with energy, power, style and absolute mastery, LIVE on stage in Europe and had the audience eating out of his palm, he simply could do no wrong for the thousands of screaming fans. Truly a master at work and the best is still yet to come.

Stitchie has also pioneered a completely new path in the history of Reggae Music, by becoming the first Reggae Artiste to write and published a Book entitled, “The Power Of Determination”, his Autobiography, for global distribution.

• Stitchie was the first Dancehall Reggae Artiste to be signed to a major label.
• Stitchie was the first Dancehall Reggae Artiste to be signed to Atlantic Records (1988).
• He was the first Dancehall Reggae Artiste to hit the Billboard Top 20 Dance Chart with a song entitled, “Dress To Impress”.
• Stitchie has had numerous #1 singles in the U.K., Europe, U.S.A., Canada, Jamaica and the Caribbean (1987 – 2011).
• Stitchie is the first Jamaican Reggae Gospel Artiste to have his own Record Label (Drum & Bass Music & Publishing Company Limited).
• During his tour of Canada in late 1999, Stitchie’s music has lead over 200 souls to the Kingdom of God, including his own brother and his brother’s wife.
• Stitchie has shared stage and ministry with leading gospel exponents Dr. Myles Munroe, Donnie McClukin, Noel Jones, Kirk Franklin, Martha Munizzi, Paula White, Alvin Slaughter, Fred Hammond, Helen Baylor, Trinity 5-7, Israel Haughton, Tramaine Hawkins, Ron Kenoly, Terry MaColmon, Renetha Macklin, John Pee Kee and others.
• He has recorded with artistes such as LL Cool J (“Straight From Queens” on the album “Fourteen Shots to the Doom” which sold Platinum); Actor Steven Segal, En Vogue (Re-mix of the song “Give it Up, Turn it Loose”), Da Youngstas (song entitled, “Honey-comb Hide Out”), Dr. Myles Munroe (renowned Author and Tele-Evangelist), Know Da Verb (Gospel Rapper), Limit X, Gregory Isaacs, Marcia Griffith, UB40 and others.
• Stitchie has a reputation for exhilarating performances and has toured extensively the USA, the UK (England and Wales), Poland, Germany, Italy, the Netherlands, France, Africa, Denmark, Switzerland, Belgium, Venezuela, Canada, Japan, Belize and the Caribbean.
• Stitchie was the first reggae gospel artiste to perform at the world’s largest reggae festival, “Reggae Sumfest” in Montego Bay, Jamaica.
• He was the first reggae gospel artiste to perform at the world’s largest jazz festival, “The Montreaux Jazz Festivals” in Switzerland, which was brought live on the Internet to an audience of five million viewers.
• Stitchie is the first Jamaican Reggae Gospel artiste to record a song in another language (Spanish).
• Stitchie is the first reggae artiste, and only the third person to be so honoured by the nation of Belize, when he was presented with the Key to the City.
• Stitchie has received two commendations from the Mayor of Kingston, Jamaica, Desmond McKenzie and the Mayor of Lauderdale Lakes, Florida, Samuel Brown respectively, in 2004.
• Stitchie is recorded in the World Guinness Book of Who’s Who in Reggae.
• Stitchie has been credited with the honour of being the first Artiste to bring Dancehall Music to Germany and the rest of Europe in 1989, as stated in the Book “The History of Reggae in Germany”, published in 2008.
• Stitchie has been ordained as a Reverend, a Minister of the Gospel.
• Stitchie has been the first Caribbean Gospel Artiste to appear on Gospel show “The Gospel of Music with Jeff Majors” on National Television in America to over 60 million homes in March 2007.
• Stitchie is the first Reggae Gospel Artiste to perform of the largest Reggae Festival in Germany – “Reggae Jam” in 2007.
• Stitchie is the first Dance Hall Artiste and Caribbean Gospel Artiste to have been conferred with an Honorary Doctorate Degree in June, 2012 from Cornerstone Christian University in Orlando, Florida, USA.
• Stitchie was inducted in THE GOSPEL HALL OF FAME in New York on December 28, 2014.
• Stitchie is the first Reggae Artiste to have written a book himself, entitled “The Power of Determination”, his autobiography, which was self-published on January 1, 2015 and set to be released globally in late first quarter – 2015.
• Stitchie received an Iconic Honor Award on February 28, 2015 from the Jamaica Reggae Industry Association for his continuous contribution to the development of the Reggae Music Industry Globally.