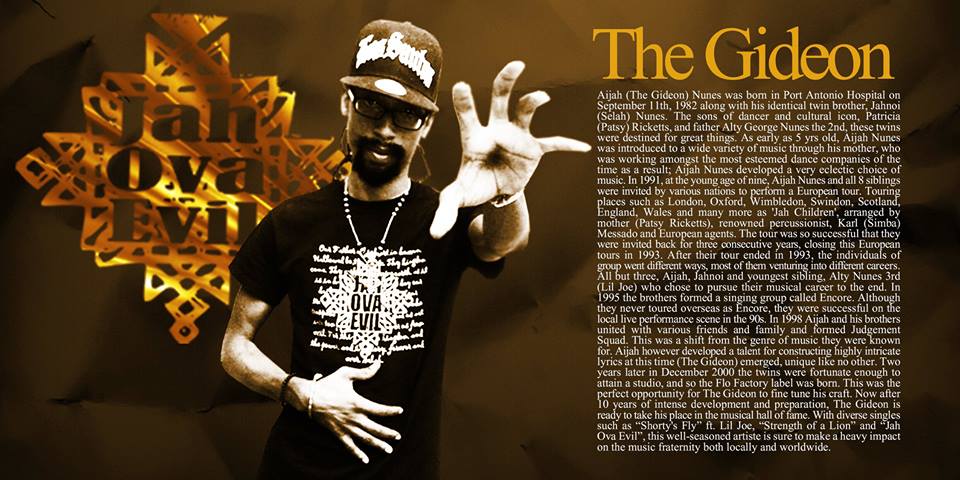 Aijah (The Gideon) Nunes was born in Port Antonio Hospital on September 11th, 1982 along with his identical twin brother, Jahnoi (Selah) Nunes. The sons of dancer and cultural icon, Patricia (Patsy) Ricketts and father Alty George Nunes the 2nd. These twins were destined for great things. As early as 5 yrs old, Aijah was introduced to a wide variety of music through his mother, who was working amongst the most esteemed dance companies of the time as a result; Aijah developed a very eclectic choice of music.
In 1991, at the young age of nine, Aijah and all 8 siblings were invited by various nations to perform a European tour. Touring places such as London, Oxford, Wimbledon, Swindon, Scotland, Ireland and many more as ‘Jah Children’. Arranged by mother (Patsy Ricketts), renowned percussionist, Karl (Simba) Messado and European agents. The tour was so successful that they were invited back for three consecutive years, closing this European tours in 1993.
After their tour ended in 1993, the individuals of group went different ways, most of them venturing into different careers. All but three, Aijah, Jahnoi and youngest sibling, Alty Nunes 3rd (Lil Joe) who chose to pursue their musical career to the end. In 1995 the brothers formed a singing group called Encore. Although they never toured overseas as Encore, they were successful on the local live performance scene in the 90s.
In 1998 Aijah and his brothers united with various friends and family and formed Judgement Squad. This was a shift from the genre of music they were known for. Aijah however developed a talent for constructing highly intricate lyrics at this time (The Gideon) emerged, with a style and sound like no other.
Two years later in December 2000 the twins were fortunate enough to attain various studio equipment, and so the Flo Factory label was born. This was the perfect opportunity for The Gideon to fine tune his craft. Now after years of intense development and preparation, The Gideon is ready to take his place in the musical hall of fame. With diverse singles such as “Shorty’s Fly” ft. Lil Joe, “Strength Of A Lion” ,“Patiently”,“To The King” and “Jah Ova Evil”, this well seasoned artiste is sure to make a heavy impact on the music fraternity both locally and worldwide.

The Gideon is a revolutionary artiste, who spreads one message which is love and happiness. With a barrage of complicated yet perfectly clear lyrics. The Gideon emerges as fresh new talent straight from the streets of Kingston, Jamaica.
Jah Ova Evil Records © ™