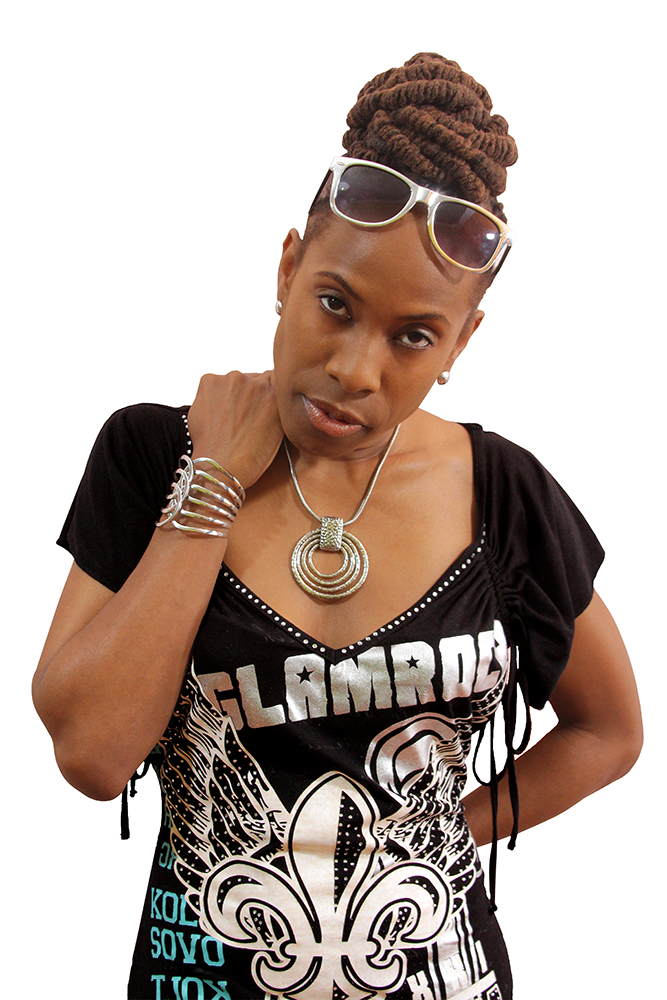 Though the Reggae/Dancehall industry is dominated by men, Karamanti stands as a strong black woman, (in her home town of Kingston, Jamaica) raining showers of conscious lyrics to a generation far from reality.

Karamanti has been creating music since she was eight years old. Falling in love first with rap (or hip-hop), then embracing Dancehall and now passionate about Reggae. In spite of the fact that she has been making music for most of her life, she only began to pursue it as a career in 2011. Currently regarded by many as one of Jamaica’s best female lyricist, Karamanti writes her own songs and operates her own record company; Blakkwuman22 Music.

Industry insiders began paying attention to her when she released the single “don’t it,” produced by Red Boom in 2012. The track exposed her to a hardcore Dancehall audience that was eager to hear more from the self-acclaimed Pan-Africanist. Karamanti spent the summer of 2012 engaged in a nationwide media tour which had her performing, and/or being interviewed on most of the major entertainment radio and TV programs in Jamaica. That was followed by a Canadian tour which featured performances on big events such as the Montreal Reggae Festival and the Toronto Rasta Festival.

ACCOMPLISHMENTS
Since she officially stepped out on the scene in 2012, Karamanti has been consistent in releasing songs which focuses primarily on social and political issues. She has done several music videos and live performances both in Jamaica and overseas.

Karamanti’s voice can be heard on some of the biggest Reggae and Dancehall rhythms coming out of Jamaica: Heights Riddim (“Gye Nyame”), Rock Island Riddim (“Fake Rasta”), Life Triangle Riddim (“Hold On”), Reggae Land Riddim (“Domestic Abuse”), Love Bounce Riddim (“Da One Ya Fi”) and that is just to name a few. She has also enjoyed success with singles like “Read,” which was produced by Denmark’s #1 Dancehall artist/producer, Pharfar. The song got heavy radio rotation and climbed to the #1 spot on the Top Ten Conscious Chart which airs on Jamaica’s Roots FM. It sat there for weeks beating out songs from now popular artist, Chronixx.

In April 2013, Karamanti released her first and only studio album entitled Dancehall Retaliates. It was released on her Blakkwuman22 Music label with production credits going to both Ricardo ‘Red Boom’ Reid and Shamarie ‘Digital Sham’ Bogle. Karamanti was nominated as best the female solo artist for 2013 by the Dancehall Industry Awards (held in the UK). Additionally, one of her videos for the song “Rise” (which is on the album Dancehall Retaliates) was nominated as best Dancehall video for 2013. To top it off, Reggae France included Dancehall Retaliates in the WINS REGGAE AWARDS in the category for Dancehall Album of the year for 2013. Here she went up against two Jamaican heavy weights: Vybz Kartel and Mr. Vegas.

Karamanti has performed all over the world. She has graced stages in cities like Gothenburg, Stockholm, Hamburg, Prague, Copenhagen, Roskilde, Aarhus, Paris, Brussels and more in Europe; and Vancouver, Toronto, Montreal, Seattle, Bellingham and more in North America; and Dominica Republic and of course, Jamaica in the Caribbean.

HERE & NOW
On November 1st, 2016, Karamanti released the track, “Back Against The Wall,” which features veteran Reggae artist Mikey General. The song is the first single from her now released EP, entitled: The Black God. The EP was officially released on March 21st and have been getting favorable reviews since it was shared. Persons can listen to all songs at: https://karamanti.bandcamp.com.

Additionally, Trinidad’s new TV network, GT (Great Things), which can be viewed on the Synergy platform, has just contracted recording artist Karamanti to act as the company’s Brand Ambassador for Jamaica. Karamanti’s commitment to the organization will include, but are not limited to, ensuring that the GT brand gets maximum visibility on and in some cases, off the island.

Karamanti is currently getting ready to go on the road to promote The Black God EP. In addition to doing shows in Jamaica and North America, she is also expected to make appearances in Europe and West Africa before the end of the year.

Persons wanting to work with Karamanti should do so using the contact details outlined below.