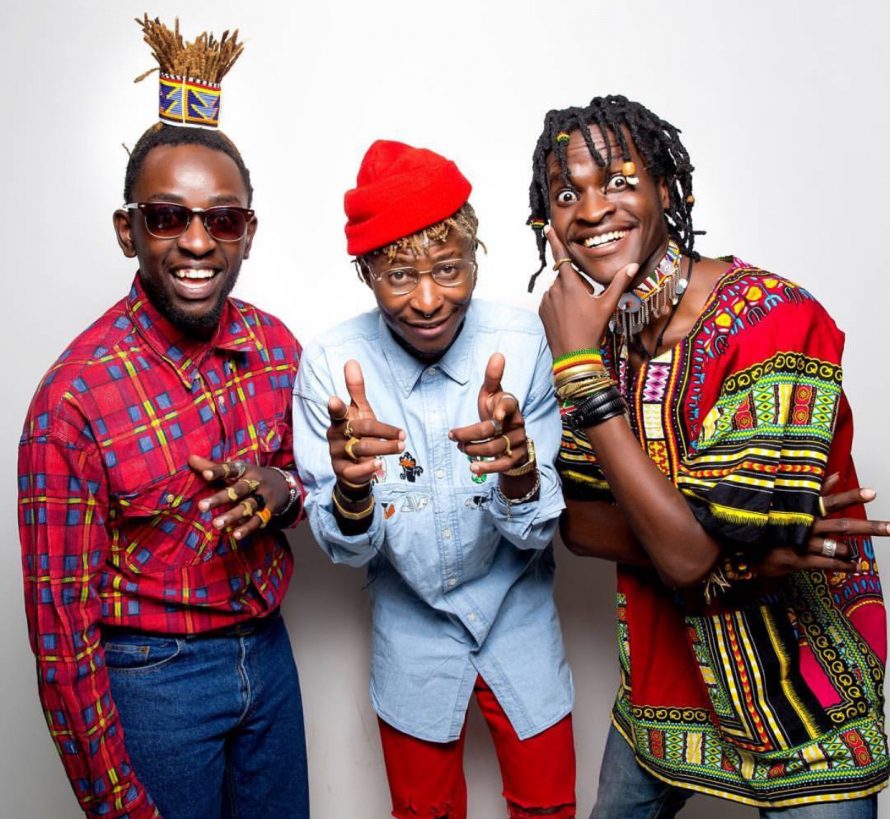 “In hope, dreams are dreamt and the dreamers go out there, chase that dream till it’s in their reach”
Clinging on to a vision of changing the world with their art, these three versatile blend of artists Mordecai Mwini Kimeu, Wachira Gatama and Kenneth Muya Mukhwana have defied all odds against them to be labelled as one of the best bands in Kenya and East Africa. With time, they have artistically flourished into a revolutionary force not only in their musical poetic presentation but also in their conspicuously fashionable sense of futuristic style.
Meeting in the corridors of their acting careers at the Kenya national theatre in late 2012, the three discovered that they share a similar passion for music, spoken word/poetry, fashion and arts in general. Not long after H_ART THE BAND was formed. They later joined Penya Africa’s prestigious artist development program Sauti Academy from which they graduated from in April 2014; after a year of hard work, determination and performing at almost every venue and street corner in Nairobi, Kenya, building an ever growing steady reputation with various audiences.
Picture soulful African inspired acoustics, smooth harmonised vocals fused with a touch of well-knit spoken word/poetry all blended into one thick pastry of art then served with a witty sense of humor. Alas! H_ART THE BAND. Heavily inspired by day-to-day experiences, their music speaks to generations: from the young to the aged. With Mordecai and Wachira both being “Slam Africa poetry Kings,” self-taught guitarist Kenchez compliments their rhymes with smooth African tunes, while Mordecai adorns their jams with his heavenly vocals, thus creating a fresh genre they like to call AFRO-POETRY.
By aligning their unwavering dedication to the do-it-yourself work ethic with their undeniable musical versatility, energy and witty nature they make every performance a pulsating ‘fan-magnet’. H_ART the BAND always give their fans a memorable feel-good experience.

With only a few years in the Kenyan music industry, they have been named in the MCSK top 10 highest earning artists list in Kenya. Most recently, bagging the Mdundo platinum award for having more than 50,000 online downloads. With nominations for awards such as Mdundo Awards ‘Best Afro-pop single’ and ‘Best overall single’ for their debut single ‘Uliza kiatu’. The song has also landed them two nominations in the All Africa Music Awards (AFRIMA 2015) ‘Revelation of the African continent’ and ‘Most promising artiste in Africa’. Tagging from their eclectic to die for performances, Bingwa awards 2015 has also nominated them as ‘Stage performer of the year’.
With four singles released under their label Penya Africa: Uliza Kiatu, Nikikutazama , Love phobic and their latest Baby love being on heavy rotation in various stations there is no limit to the amount of greatness they harbor. H_art the band have become icons of hope for individuals with concurrent ambitions.