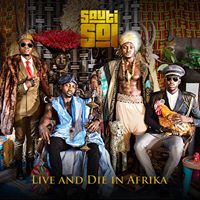 Their third studio album, titled Live and Die in Afrika, released online on the 21 November 2015, was available to Sauti Sol fans globally for free download for 48 hours as an early Christmas present. The album was released under their imprint label Sauti Sol Entertainment as a self-produced work by Sauti Sol. A total of 400,000 downloads were made during the free download period

Sauti Sol has steadily built their professional international experience. A tour through Europe in 2010 took them to Sweden where they made a television appearance and recorded their sophomore album, Sol Filosofia. In February 2012 they debuted at the Festival sur le Niger in Mali where they were performed alongside some of their African idols: Habib Koite, Salif Keita and Lokua Kanza. In March 2011, the band made their first American appearance at the South by Southwest Music Festival (SXSW) in Austin, Texas. In 2012, they made a return to SXSW. Celebrated by a host of fans, fellow artists and bloggers as the “most entertaining” and “best dressed act” at the festival, Sauti Sol plans to return to their growing fan base in America and the diaspora. In June they performed at the Kalorvy Vary International film festival and Colours of Ostrava 2012, Czech Republic’s biggest music festival. Between Sept-Dec 2012, Sauti Sol signed with Kenya’s Niko Na Safaricom Live Tour transporting their renowned electric live performances to their fans in major towns. Sauti Sol has also performed at widely televised events including: the MTV Africa Music Awards (2014), inauguration of Kenya’s President Uhuru Kenyatta (2013), the inaugural Africa Magic Viewers Choice Awards held in Nigeria (2013) and at the Big Brother Africa Reality Show in South Africa (2012). In 2013, they also headlined at Boombaataa Festival (Kenya) and City of Stars festival (Malawi). In 2014, they performed at Blankets & Wine at 50 Festival (Kenya), Zanzibar International Film Festival and in Netherland’s Eindhoven (June 2014).