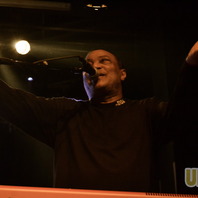 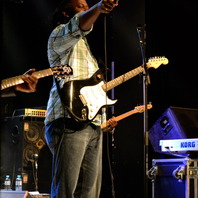 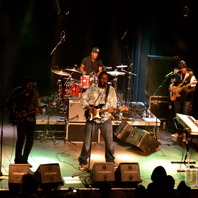 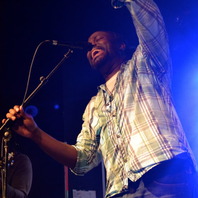 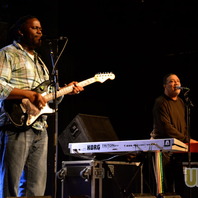 What a big night, full of vibez, big thanks to the support acts TRANCITIV and boNGoreGGae and for sure to the lovely musicians from The Orginal Wailers!

Welcome in Austria and thanks for taking the time for this interview!

So the first question, what means traditional Roots music for you and which characteristics does it have for you?

The music that I understood was Ska. Ska music was the music that started all the instruments we’re counted for, including upright bass, trumpets, saxophone, flute, guitar, bass, drums, keys, organ. So in all, for me it was Ska, then Ska turned into Rocksteady and then Dancehall and all these things, so the roots for Reggae music is Ska. Thats what I learned when I was educated in Jamaica. (Al Anderson)

Everybody is using the words of One Love and Rastafari, what does it mean for you?

It’s out of many people – ONE LOVE, there’s so many people in Jamaica, from different races, christ and colors, so out of so many mixes from white black yellow red and brown, thats where one love comes from. (Al Anderson)

What do you think about the Dancehall music, dancing styles and lyrics coming up more and more now?

Hmm, You have to chat to the boss here (points at Tyrone), Jamaica is so progressive the people am are so happening they are too hip, so thats just an extension of the music they heard, growing up from Rocksteady Ska. (Al Anderson)

So they want to be too good and famous?

I don’t really think that’s the situation I think that everyone is trying to take care of the children in their homes, and they wanna make an economic lifestyle for their families. And anyway that they are growing into, which means whatever area you come from the certain areas where dancehall is prominent, and the other areas where its more like Reggae and Rocksteady and these areas where the people, olders, are into mental music, was Ska. You have to ask Tyrone, Tyrone is more the man who was in the bigger forefront with Dancehall music, with Beenie man and all them, he was a big, one of the bigger session cats in Jamaica who can explain it to you more than me so…. (Al Anderson)

He is eating at the moment so we’ll wait.

What do you want to know? (Tyrone Downie calling from behind)

What you think about the Dancehall lyrics and dancing styles like daggering, why did it move in this direction?

Do you think there will be a Roots revival, means Dancehall won’t be that important anymore?

Who were your past, and are your present, future Reggae favorites from all of you?

Wow, well my reggae favorite right now is this huge name Chet Samuel (laughing) this type is incredible, you can check him on his solo cd, this dude is the future. (Chet Samuel)

Alright (laughing) and of the other ones?

I heard that Bob Marley heard so much Rock and Jazz music before he started to concentrate on Reggae music, which artists did he like?

What was the most memorable moment in your career, of everybody?

Tonight in Vienna it was my favorite moment, (laughing). (Al Anderson)

No seriously, I wanna hear the truth, there are situations nobody awaits…

Hmm, just being associated to the music, was the most exiting thing in my live, and up to meet these guys and meet bob and peter tosh and all the people who came with reggae music. Hmm, its luck, a lot of is luck, and a lot of is not your choice, people chose you, so you don’t really have an outstanding opinion when anything is alter than your skills and your technic. So if somebody likes what you do, you have an opportunity to be involved in the music that’s being played and we are lucky, that everybody here is very experienced and we’re happy to have a opportunity to live the life we live like traveling and playing for people and I think thats the most important thing for me, the people make the world go round, without people there is nothing happening. (Al Anderson)

Two last questions, what are you doing in your free time, between the tour?

We have no free time… (Tyrone Downie)

Our free time is driving and sleeping … yeah pretty much … it is an intense tour … we have to be prepared … we have only 4 days off for the whole tour… yeah for 30 days … but these guys are music, men … yeah we walk to the studios although. (all together)

So after the tour you are going home to your family and doing what?

We still work all, everybody of us is a workaholic (Chet Samuel)

What are you working?

Studio, touring, writing, producing… (all at the same time)

So you are all only working with music?

Yeah thats what we do, we are open, its a full time job, yeah, and when we get an opportunity to work together, we just hit the ground (claps his hands) and we run away. (Chet Samuel)
bq. That’s right, everything is improvisation you know, we just… everything you hear is impro, its not like we plan to do it this way,just call it our songs and fill it up. So you want to make a group picture? (Al Anderson)

Yeah for sure, thank you for this interview!

You welcome, thank you and thank you for waiting.