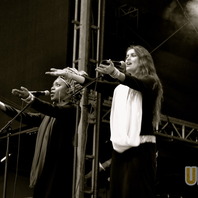 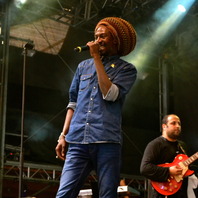 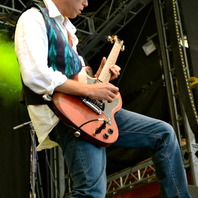 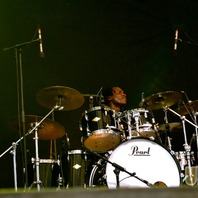 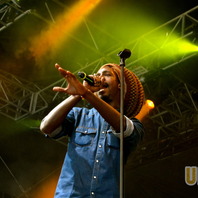 Meta & The Cornerstones, a cultural puzzle of people from all over the world living up unity and love for music in a completely new way. Crowd attracting with a lot of strength in the voice of singer Meta Dia, the whole band embody joy and happiness during their show and backstage during the interview. We are sure that the world will hear a lot about this band in future, because Meta & The Cornerstones prove on stage as well as in their lyrics, that a revival of love and tolerance in Reggae music and cultural areas is possible!

Born in Senegal, West Africa, lead singer of Meta and The Cornerstones, Meta Dia, discovered his love for music and desire to be a musician at a very young age. Listening to Reggae greats Bob Marley and Gregory Isaacs helped nurture his admiration and true appreciation for all types of music. As a self-taught musician, by age 14 he was performing on the street and stages of his hometown Dakar, Senegal. In 2000, Meta formed his first band YALLA SUUREN (God Bless), which was nominated for Best Hip-Hop/Reggae Group by the French Cultural Center the same year. Within two years, Meta had become one of the premier pioneering voices of the Hip-Hop culture in West Africa. After relocating to the United States, Meta immediately began collaborating with artists such as Sean Blackman, and Hip-Hop Ambassador Toni Blackman. Shortly after settling in New York City, he formed his visionary band, Meta and The Cornerstones.

Meta and The Cornerstones channels Roots Reggae while simultaneously breathing new life into the genre, thus creating what critics have called a “soul-pounding spiritual experience” during their live performances. Inspired by Alpha Blondy and Lucky Dubee, they have shared the stage with Reggae stars Luciano, Steel Pulse, Clinton Fearon, Israel Vibration, Lee ‘Scratch’ Perry, Gentleman and Tanya Stephens amongst others. In 2007, the band was personally invited by Senegalese-born international superstar Youssou N’Dour to perform at his annual African Ball concert at the Nokia Theater in New York. The following year Meta and The Cornerstones proudly released its first album entitled “Forward Music”. Of this work Clive Chin; Jamaican producer for The Wailers, Dennis Brown, and Lee ‘Scratch’ Perry, notes, “Meta and The Cornerstones have taken us back to the foundation of reggae music”.

First of all, welcome to Austria Meta!

Was it a dream to become a musician?

Yes, I grew up loving music as a kid coming from a country with a strong cultural mindset and the influence of TV and radio blasting music from all around the world. When Hip Hop became the new thing that’s when I really started to get into it; writing, rapping on the streets of Dakar.

As your whole band members are from different corners of the world, how did you meet?

When I moved to New York I wanted to continue my music there, learn English, develop myself. By going to a lot of jam sessions, open mic’s, I started to connect with musicians. Pretty much it happened organically as the musicians living in New York City come from different places. The city is a true melting pot.

What’s the story behind your name?

My name is Meta and my band is called The Cornerstones, which means the foundation, the roots.

Why do you think are you of all people the first african band contracted on VP Records?

Actually I don’t even see my band as African or European, or American. My music is about Peace, Love and Harmony, it is the language of the free soul. VP Records is known for Reggae and I wanted to spread the music with a big machine. I am grateful for all of the support we’ve gotten so far.

You use lots of different styles in your music, is there any style you would not like to use?

Music is music and we have to be open minded to collaborate and create beautiful vibrations with all kind of styles. One thing I would never use is lyrics that disrespect, degrade mankind or pollute the young mind.

Beside lots of styles, Reggae seems to be very important for your music, what meens One Love, Haile Selassie and Rastafari for you personally?

When I hear One Love I think of One God, because for me God is the eternal love that never stops loving.
Usually lots of journalists ask me the same question about Rastafari, if it is my faith or religion. I tell them it is not. I fully respect Haile Selassie and all the great human beings that inspire the world to be a better place. But as a Muslim I believe God and his Prophets, from Abraham to Prophet Muhammad Rassulullah (saw).

Who are your past and current music influences and favourites?

I love any artist that spread a positive message, from a singer to a painter or a writer. I definitely love Bob Marley’s music. But my musical influence reaches to salsa, funk, R&B, hiphop, rock, soul… it is large.

Who do you want to reach and touch with your music and how?

I want to reach the whole world!! And how? By spreading Peace, Love and Harmony, understanding and tolerance through positive music. Each one, teach one.

Do you plan some collaborations for the future among Reggae musicians? What can we expect if there is a new album in planning stage?

Yes I plan some collaborations, it depends on where my head and heart are heading. It will be wondergreat IN SHA ALLAH!

What are your plans now after this last gig tonight and how will you enjoy your free time?

Thanks for the Interview and enjoy your evening in Austria!